The City of Pelham (the "City") is issuing this Request for Proposal and Developer Qualifications (RFP/RFQ) respecting the development of certain City-owned real property located on Oak Mountain Trail at the Northwest corner of Highway 52 East, Highway 35 and Interstate I65 as referenced and referred to as the “Oak Mountain Trail Project”.   All interested parties are encouraged to read the RFP/RFQ and submit proposals.

In October 2021, the City acquired an 11 acre site for the purposes of creating a multi-use commercial development project.  The City has already entered into an agreement to transfer 4 acres via a land sale, to a known entity for the construction and development of a new Tractor Supply retail store.  With the balance of 7 acres of real property, it is the intention of the City to solicit proposals for the acquisition of land and the development of a hotel and commercial project. 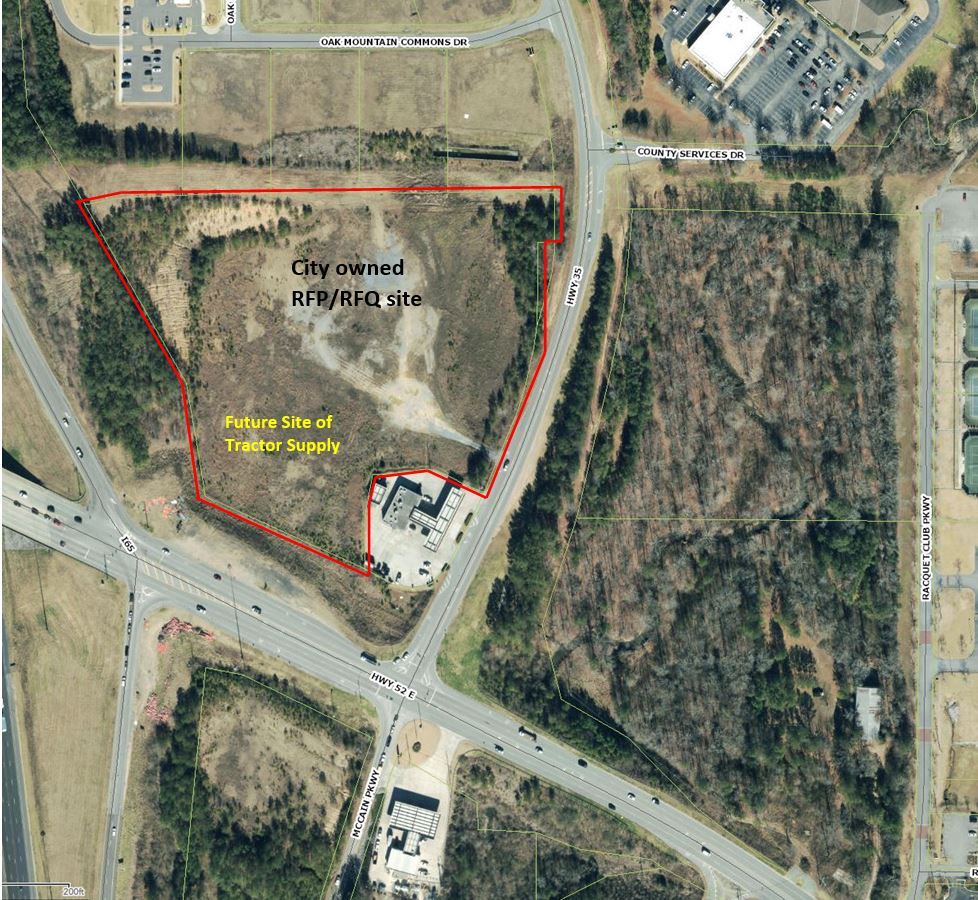 Specifically, the City desires development of a 100-140 key hotel offering amenities such as, but not limited to, a restaurant, fitness room and pool (the "Hotel"), on approximately three and one half (3.5) acres along the northern portion of the proposed Project Site.  The City also seeks development of approximately eight to ten thousand square feet (8,000-10,000 sqft.) of additional commercial space for uses such as, but not limited to, retail, restaurant, neighborhood servicing commercial that could be proposed as one (1) standalone building or two (2) free standing buildings (the "Commercial Development") on the remaining acreage.

Submittal Deadline: June 28, 2022, no later than 4:00pm (CST)All questions, requests for clarifications or information, and other communications relating to this RFP/RFQ must be directed to: Michael Simon, Economic Development Director

REQUEST FOR PROPOSALS AND DEVELOPER QUALIFICATIONS

The City of Pelham (the "City") is issuing this Request for Proposal and Developer Qualifications (RFP/RFQ) respecting the development of certain City-owned real property located on Oak Mountain Trail at the Northwest corner of Highway 52 East, Highway 35 and Interstate I65 as referenced and hereinafter referred to as the “Project Site”.   Interested respondents are encouraged to read this RFP/RFQ carefully.

The City has a population of approximately 26,000, with a median household income of $76,558. The City is the home of Oak Mountain State Park, Oak Mountain Amphitheater, Ballantrae Golf Club, the Pelham Civic Complex & Ice Arena, Pelham Racquet Club, newly developed Greenway Trail system along with a new Library and Elementary School.  The City is located approximately 20 miles south of downtown Birmingham and 75 miles north of Alabama’s State Capital in Montgomery.